Watch our short video about the New York Health Act!

*for closed captioning, please click the icon that says "cc" for language options*

Guaranteed Healthcare for All New Yorkers

The New York Health Act [A6058 / S5474] will provide comprehensive health coverage for every resident or full-time worker in New York. You and your health care providers work to keep you healthy -- New York Health pays the bill.

How New Yorkers will benefit:

For all these reasons, support for the New York Health Act is growing. The NY Health Act was reintroduced in 2021 with majority support in both the Assembly and Senate! The NY Health Act has passed the Assembly four years in a row (2015-2018). We desperately need a healthcare system that will reverse decades of inequality through progressive funding; end the horrors of delaying needed care due to medical costs; and relegate medical-related bankruptcy to a footnote in history books. With your help, we can make healthcare a guaranteed right for all New Yorkers!

The New York Health Act is sponsored in the Assembly by Health Committee Chair Richard N. Gottfried (A6058) and in the Senate by State Senator Gustavo Rivera (S5474). For the full text of the bill, click here.

Here is a list of FAQs about the New York Health Act. If your question isn't answered here, email us at [email protected]

What is the New York Health Act?

New York Health is legislation in New York State that would provide comprehensive, universal health coverage for every New York resident and worker, replacing existing private insurance company coverage. You and your health care providers work to keep you healthy. New York Health pays the bill. This plan is similar to Medicare or the Canadian system — but better.

Instead of having to worry about getting health insurance through your job, spouse, or buying it on your own, all New Yorkers would automatically have their healthcare covered by a public statewide fund, regardless of age, employment, or financial means. Everyone would have access to healthcare the way everyone has access to the fire department, libraries, and schools – public services provided without your ever having to worry about a bill.

Link to this answer
How is the NY Health Act able to improve the response to a pandemic?

Across the world, universal healthcare systems that prioritized public health interventions have been better able to handle the COVID-19 pandemic.

The NY Health plan will guarantee New Yorkers access to high quality care no matter your employment, age, income, race, or immigration status. It even covers full-time workers who live outside of New York State.

Doctors and nurses can spend time caring for patients, and not fighting health insurance companies to approve care.

A more coordinated system will better be able to manage supply, staff, and vaccine distribution based on where resources are needed most.

Most importantly, profit will not be the motivation for healthcare decisions. The system will instead prioritize high quality and equitable outcomes for people.

More information on COVID and the NY Health Act can be found here.

Link to this answer
How will we pay for the New York Health Act?

Many people assume expanding coverage will mean a more expensive system. But the reality is that there is so much waste, fraud, and profiteering in the current system, that moving to a universal, single-payer model actually costs less than the status quo for both the state and 90% of individuals. Below is a graph that shows the funding sources, as well as estimated costs to individuals by income bracket for the NY Health Act. These are based on conservative estimates from the RAND Corporation that savings compared to the current system is $11 billion. The bottom line is that not only is it a moral imperative to guarantee everyone access to care as a right and public good, it is fiscally conservative. We simply cannot afford not to have a single-payer system.

For a deeper dive into the cost and savings of the system to the state and individuals, click here for our fact sheet. 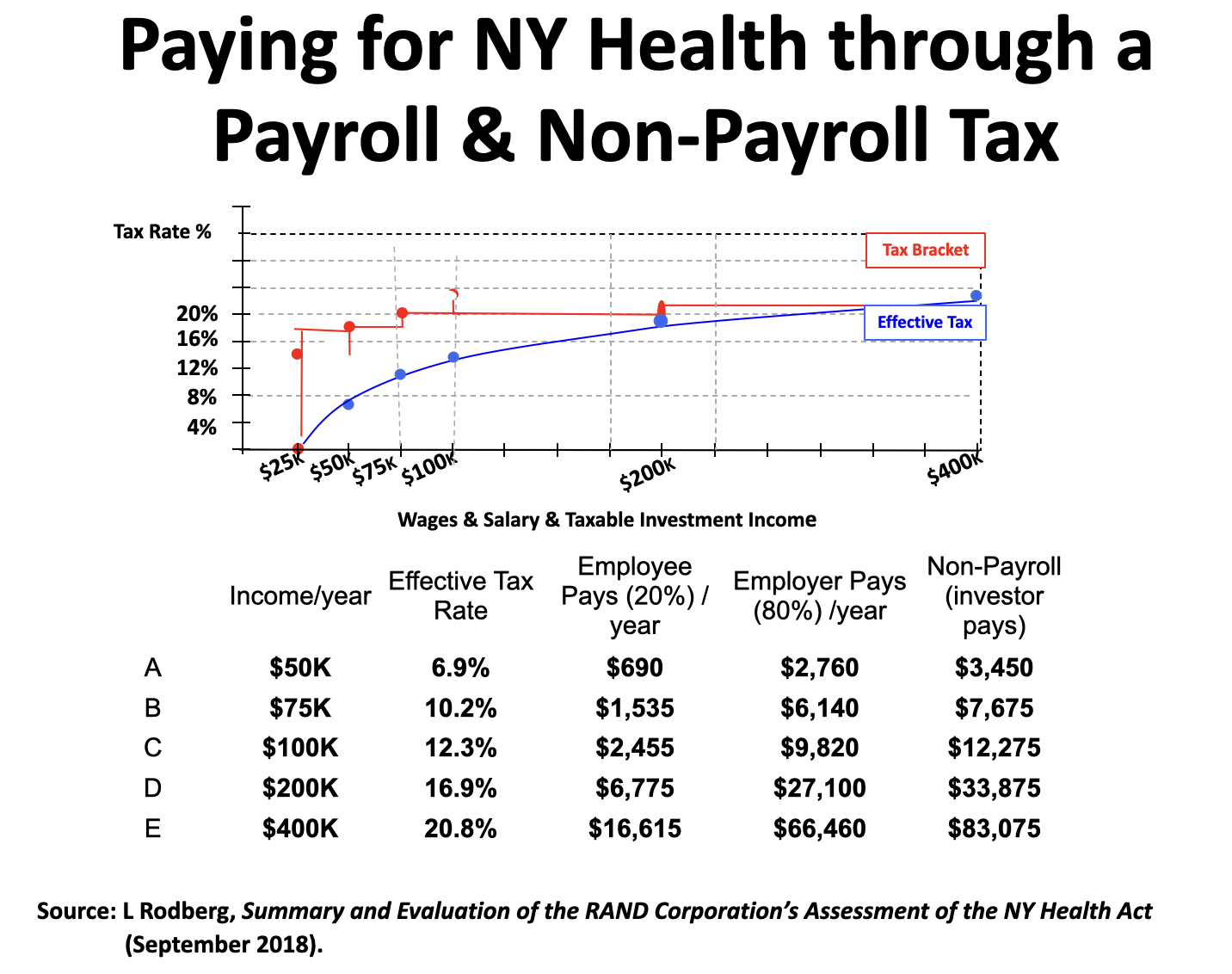 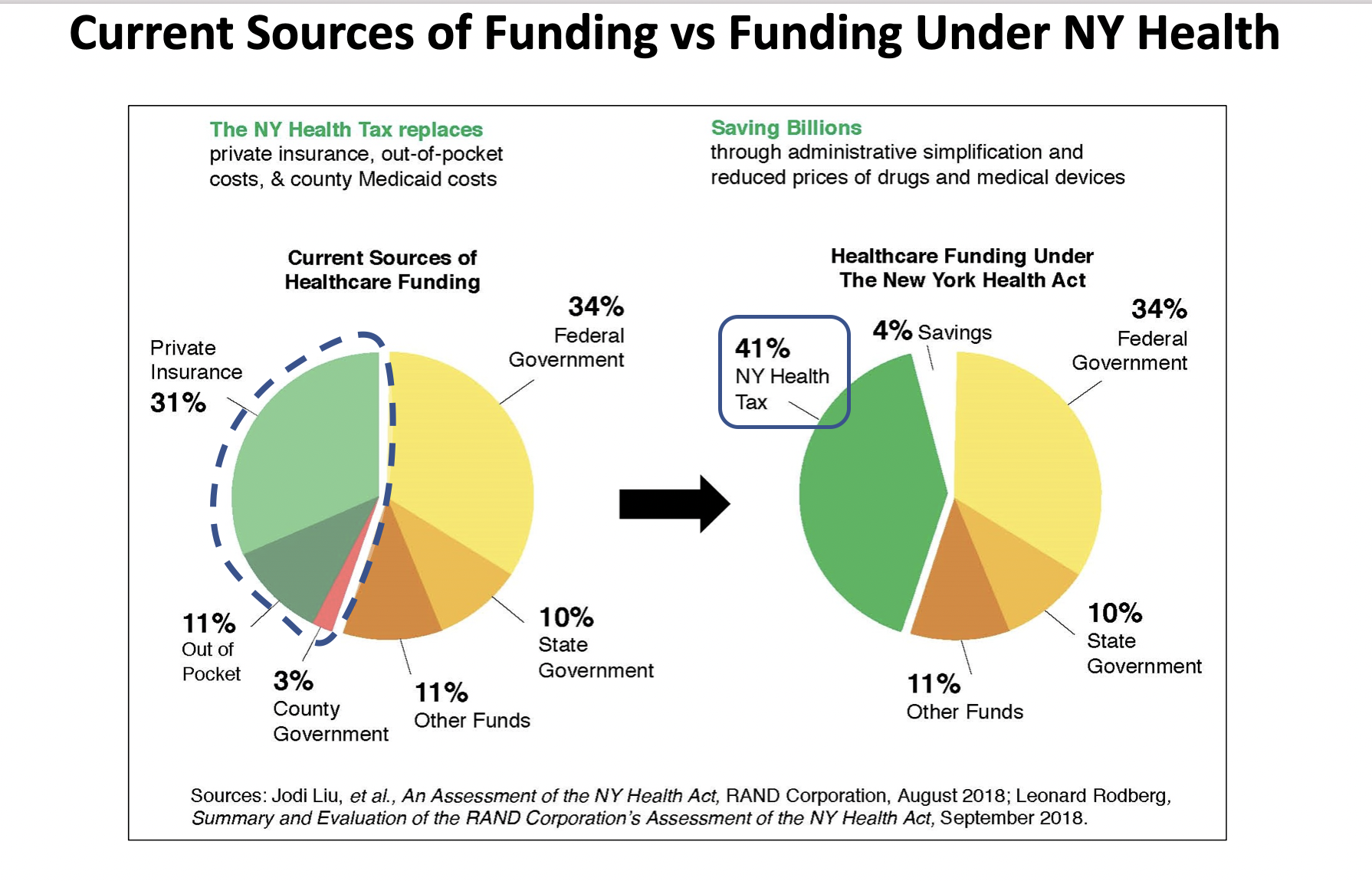 Link to this answer
Why do we need New York Health?

If you’re lucky enough to have a decent health plan, chances are you have been forced to cover more of the cost every year, while having to fight denials and limitations. The fees charged by private insurers have risen by over 50% in the last five years throughout the state. New Yorkers deserve better. We should not have to plan our jobs and lives around how to pay for essential healthcare.

While New York leads the country in how much we spend on healthcare, and the U.S. nationally spends more than $3 trillion on healthcare every year, our healthcare outcomes are far behind other high-income countries in nearly every category. For example, maternal mortality is actually increasing in the U.S. despite every other comparable country making significant gains in reducing deaths related to pregnancy.

Financial barriers and lack of access to care are significant drivers in these shameful health outcomes. Each year, 1/3 of patients with insurance go without prescribed medicines or fail to get the medical attention needed because of high deductibles and co-pays.

The current system relies largely on private commercial health insurance, which spends exorbitant amounts of money on CEO salaries, advertising to healthy “customers” with expensive ads, and creating huge amounts of paperwork and administration. Health insurance companies in the U.S. spend up to 20% of each dollar on administration; Medicare, by comparison, spends 2 cents of each dollar. We throw away billions on commercial health insurance unrelated to direct patient care.

Inequality is rapidly increasing, and your zip code can actually determine your life expectancy. The richest 1 percent of American men lives 15 years longer than the poorest 1 percent; 10 years longer for women.

The current system is designed to make profits—which it does very well—not provide health care.

Link to this answer
Can universal health care really happen in NYS?

Yes, and we are closer than ever. Last year, the bill easily passed the NYS Assembly for the fourth year in a row. We have nearly a majority of the Senate signed on as cosponsors of the bill. All of the current cosponsors are Democrats, but Republican support for the universal, public healthcare is growing. The Campaign for New York Health is trying to build a powerful grassroots movement to change what is politically possible in New York State. Join us!

Send a message to your Senator today!

Link to this answer

Press coverage of the NY Health act. Read all the press posts...

We’re Running Out of Time: Albany Must Take Action to Break Down Barriers to Abortion

Healthcare Advocates Say Excluding Coverage for All, Fair Pay for Home Care from Budget is Failure of State’s Duty to Provide Care for All Who Need It

As Fears of Winter COVID Surge Increase, Senator May Joins Syracuse Healthcare Workers and Community Members to Call on Legislative Leaders to Pass the New York Health Act in 2022

For Immediate Release: State Legislators, Advocates Unveil “Compassionate New York" Agenda to Save Lives and Billions of Dollars After COVID

The Campaign for New York Health is a statewide coalition of nurses, businesses, unions, community, grassroots and political organizations, and more — all dedicated to passing and implementing legislation for guaranteed, universal , single-payer healthcare in New York State. Healthcare is a human right that should be accessible to all of us, not just those who can afford to pay. If you agree, we encourage you to join us! #PassNYHealth #MedicareForAll