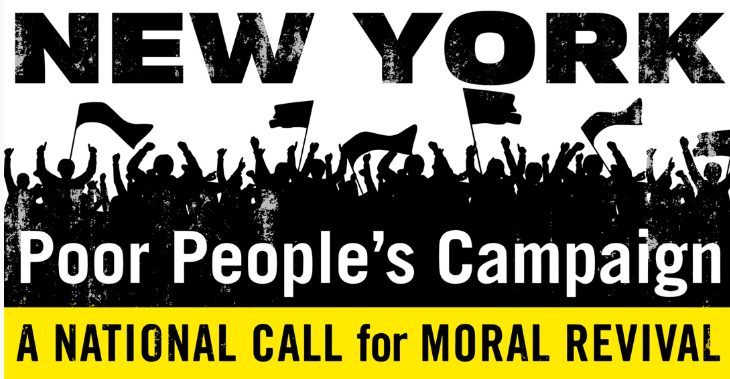 The New York State Poor People's Campaign will kick off this year's legislative session with a mass action in Albany to raise our voices and bring our demands to elected leaders.

Last year, organized tenants across New York State won a pivotal victory defending and expanding their rights. Corporate greed and lobbying dollars were unable to stop policy which helped the many instead of the wealthy few. However, we have so much more to do in order to ensure that every New Yorker can access human rights like housing and healthcare!

Join the NYS Poor People’s Campaign on January 14th - the first full week of legislative session - to demand that our elected officials prioritize people over profits in 2020. We cannot accept the false narrative that there are no resources to provide New Yorkers with healthcare and housing. Our state has immense wealth concentrated in too few hands - and our elected officials have failed to take any meaningful steps to fix New York’s inequality, which is the worst in the nation. We know the truth is that NYS has favored billionaires at the expense of the people of this state, but it doesn’t have to be this way. We must insist that our elected officials fight poverty, not the poor, by passing legislation that guarantees housing and healthcare for all!

We need to #PassNYHealth, #GoodCause, and #HSS so we can have #MedicareForAll and a #NYHomesGuarantee!

More details will be coming shortly, but please RSVP to help us plan transportation and venue. You'll receive information after you RSVP on how to register for a bus from NYC, Rockland County, Buffalo, Rochester or Syracuse. We will help to arrange carpooling from other locations.

The Poor People’s Campaign: A National Call for Moral Revival is bringing together people across the country who are organizing to build a broad and deep national moral movement — led by the poor, impacted, clergy and moral agents and reflecting the great moral teachings — to unite our country from the bottom up. Learn more about the campaign here: nysppc.org poorpeoplescampaign.org