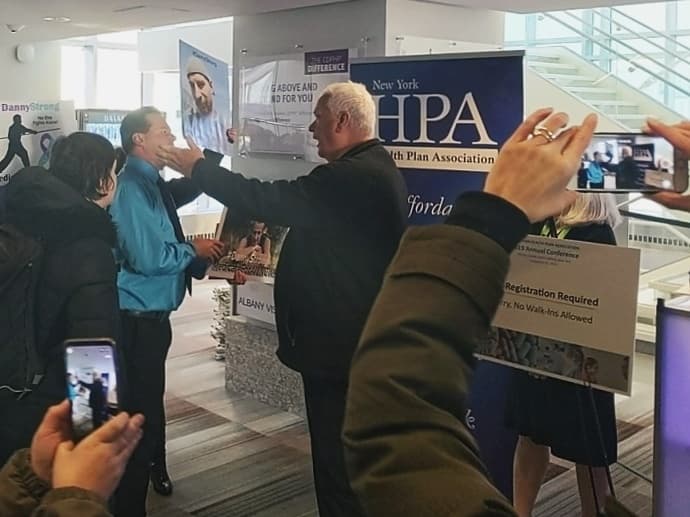 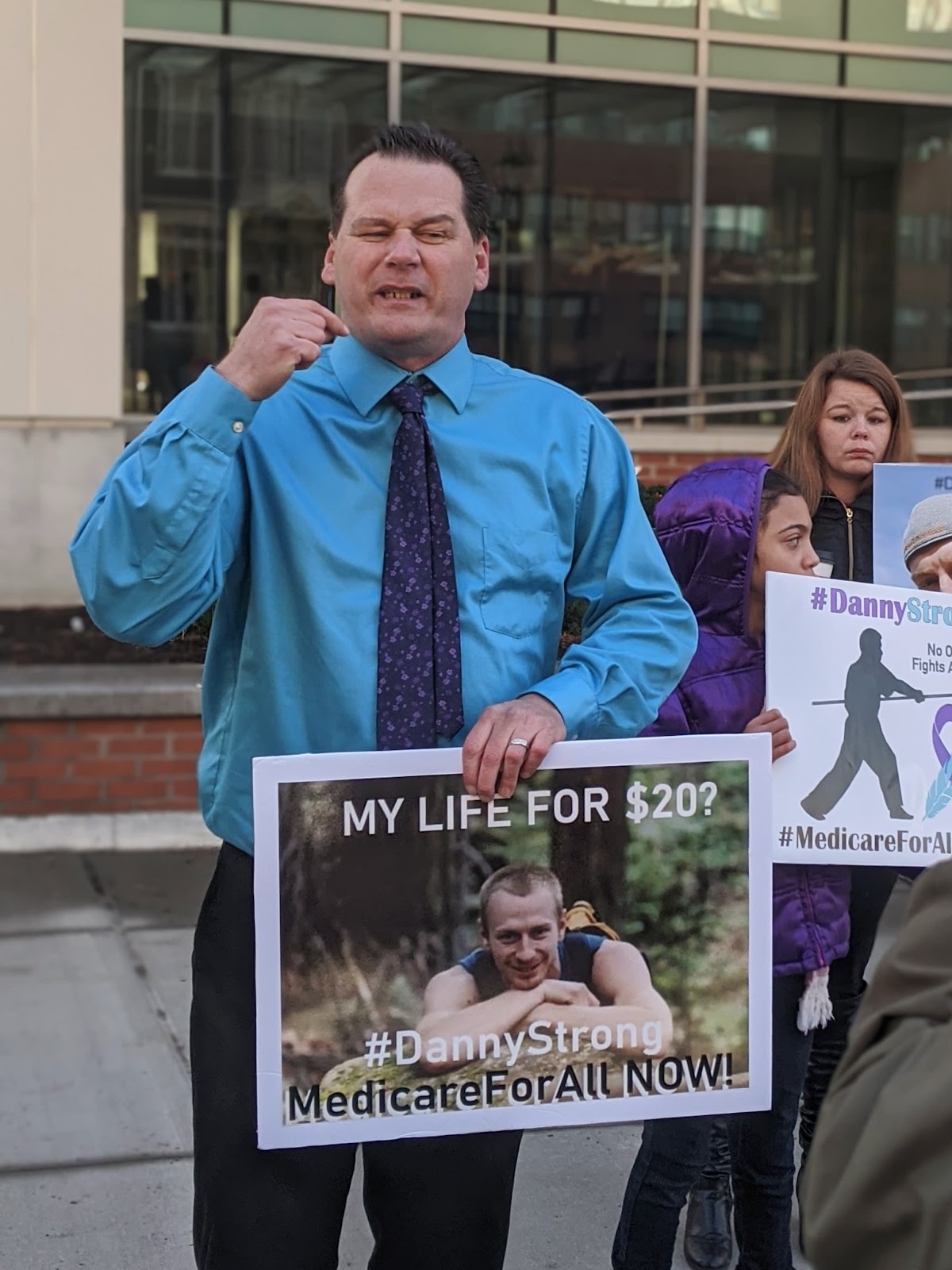 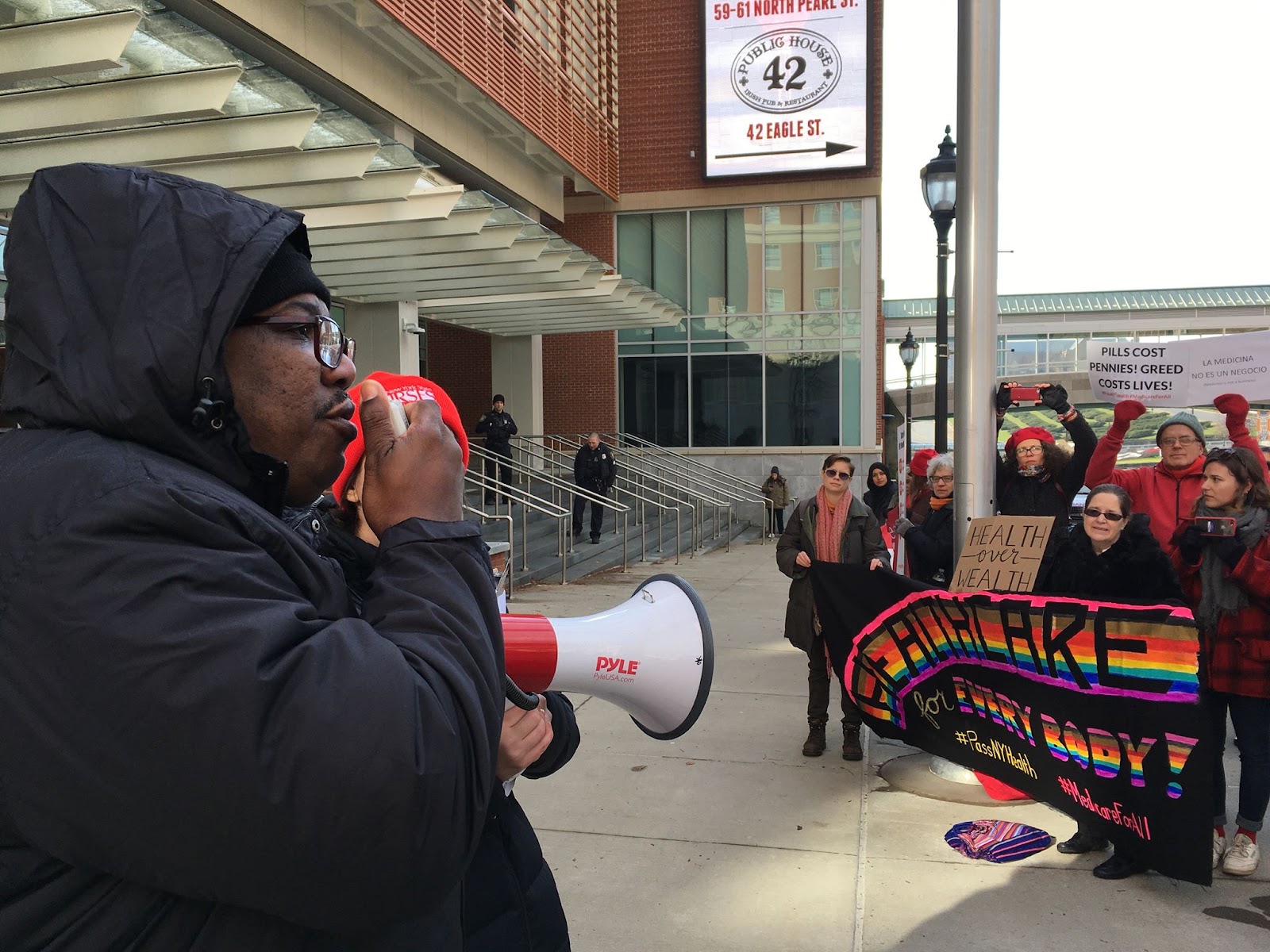 Video of grieving father Scott Desnoyers and family being ejected from the meeting: https://www.facebook.com/CampaignforNewYorkHealth/videos/466544350636996/

One week ago, advocates were shocked when NYHPA canceled the paid registration for Stillwater resident Scott Desnoyers to attend the meeting. Scott recently wrote an OpEd about his son’s tragic death.  After missing a premium payment of $20, FidelisCare canceled his plan, which prevented him from being able to afford life-saving anti-depression medication, after which he committed suicide. (FidelisCare had $60 billion in revenue in 2018.)  This morning, when Desnoyers attempted to enter the conference with his family and a letter detailing this outrageous story to the industry leaders responsible, he was manhandled and summarily ejected from the building - for video, click here.

Earlier this month, the New York State Departments of Health and Financial Services launched an investigation into UnitedHealth Group for the use of an algorithm that limits care to sicker Black patients, while biasing reimbursements toward healthier white patients. This algorithm is widely used in the industry according to UnitedHealth Group’s own promotional materials.

At noon today, the Desnoyers family joined 75 protesters to picket outside the conference of the Albany Capital Center, and delivered a list of demands decrying the insurance industry’s corporate malfeasance and blocking of meaningful healthcare reform in New York State. The protesters demanded:

The protesters charged that NYHPA and its corporate allies, including huge pharmaceutical companies whose representatives also spoke at the conference, are spreading deceptive information about this legislation in order to preserve a lucrative business model that denies care to millions of people. NYHPA is a key member of the "Realities of Single Payer" coalition, an array of corporate interests dedicated to lobbying against the New York Health Act, which would create a universal, single-payer healthcare system in the state.

“We are in a fight for our lives against the private insurance industry,” said Katie Robbins, Director of the Campaign for New York Health, a coalition of over 150 healthcare, labor and civic organizations. “People are suffering because this industry continues to line their pockets while denying, delaying, and blocking access to medically necessary care for most of us. The people suffering are standing right here with us today, mourning their loved ones lost too soon, and some of us are fearing for our own lives if reform doesn’t come soon enough.”

"We are witnessing an uprising today in the richest country in the world. Millions of Americans are demanding access to quality healthcare, for themselves, their families and in their communities,” said Marva Wade, RN, New York State Nurses Association Board Member. “They know that the health insurance business stands in their way, making money by denying care. Nurses stand with these millions who aren't getting the care they deserve. We are with our union allies, community organizations and public health advocates here in New York State urging passage of the New York Health Act, a single payer/Medicare for All law. Now is the time. Patients over profits!"

“New York doctors are heartbroken by the constant stream of patients who get sick or whose conditions worsen because they can’t afford to see us for necessary preventive or curative care, or to purchase their prescriptions -- largely due to unaffordable premiums, copays, and deductibles,” said Oliver Fein, MD, Chair of Physicians for a National Health Program - New York Metro Chapter. “The private insurance industry must be taken out of the equation and replaced by a public system that guarantees health care for all, with no cost barriers.”

"The NY Health Plan Association makes me sick. Both morally and physically by denying healthcare access to tens of thousands of New Yorkers in order to make their member shareholders a little more money. So we are here to take back our health and give NYS the prescription that will save lives--single payer healthcare." Jennifer Flynn Walker, Senior Director of Mobilization and Advocacy, Center for Popular Democracy

"If we maintain our current healthcare system, we are choosing to value exorbitant profits for insurance companies over the livelihoods of the vast majority of people. At its core, access to healthcare is less about logistics and technicalities, and more about values. Logistics can always be figured out. We as a society have to choose what we value, and commit to figuring out how to make those values a lived reality for our communities. We should value all people thriving more than we value profits for a handful of insurance company investors and CEOs. What makes the New York Health Act so special is that it not only values healthcare as a human right; it also provides a feasible and fair path to realizing that value." Mohini Sharma, MetroJustice

"From over 35 years of the ongoing AIDS epidemic, we've learned that connecting people to quality public healthcare is the best way to prevent HIV-negative people from getting HIV and the best way to ensure that people with HIV have the medications they need to stay virally undetectable and unable to transmit the disease," said Brandon Cuicchi of ACT UP/NY.

The New York Health Act (Gottfried A5248/Rivera S3577) would bring comprehensive and universal healthcare, free of copays, deductibles and limited networks of medical providers, to all New Yorkers, whether employed or unemployed, documented or undocumented. According to a RAND Corporation study released last year, the bill would save billions of dollars annually by eliminating the role of private insurance companies in healthcare coverage and greatly reducing hospitals’ and doctors’ billing obligations, lowering the administrative costs of navigating a complicated network of different insurance plans. These savings would enable full healthcare coverage for the millions of state residents now either uninsured or unable to pay the high costs of care even when insured.